A Lone Swordswoman and Her Siblings/Plot Summary

From The Alchemist Code Wiki
< A Lone Swordswoman and Her Siblings
Jump to: navigation, search

Episode 1: Girl of the Desert Village and Her Little Brother[edit | edit source]

The lone swordswoman, Setsuna, enters a small home with a bucket of water, being praised by a young boy named Jayme for her strength and the improvement she's brought to his life before his elder sister, Macherie interrupts. She laments having Setsuna do chores as a guest to their home while Setsuna believes its the least she can do for staying in one place for so long. Macherie says she's only been there a short time which is followed by a monolouge from Setsuna who is still afraid to form bonds with others. Macherie convinces her to stay by bringing up that Setsuna saved her life and that she owes her for it.

After a quick breakfast, Macherie mentions the shrine maidens are calling her in later than normal while Setsuna comments on her apprenticeship with them. Macherie says the delay is because they need to prepare a ritual so she decides to help Jayme with his homework while Setsuna heads out to examine the village, lamenting that she can't use the siblings to replace her own family. After she returns, Jayme mentions that Setsuna had saved Macherie from a giant bird and he wants to hear the story.

Setsuna mentions she collapsed after the fight and Macherie carried her home. She still shows reservations over protecting the siblings but distracts from it by rushing Macherie off to her apprenticeship before sinking back into a monologue over her failures.

Setsuna begins training Jayme in swordsmanship which she helps him understand by relating it to his sisters apprenticeship. She admires his simple beliefs about swordsmanship and protecting others before recalling her own past, her quest for vengeance, and subsequent self-seclusion. The memories cause her to stumble in her training fight with Jayme, taking a small hit from him before returning with a strike a bit too heavy. He takes it well and gets right back up but before they can begin again, monsters attack the village. Setsuna uses the opportunity to show him the dangers of real combat.

Setsuna is impressed by Jayme's calm attitude in the face of danger, hoping he will be able to protect his family without thought's of revenge. Macherie returns just after the monsters have been defeated, having left her duties early due to worry over her younger brother. She notices he has a minor injury from the previous training session with Setsuna and patches him up. They decide to return home for the day but Setsuna stays back to help fix the damage, lamenting her past failings and hoping Jayme will do better.

Setsuna and Jayme are just ending their daily training session before they return home to find the house dark and a suspected intruder inside. It turns out to be Macherie, who doesn't need light to navigate and forgot to turn on the lights this time. She apologizes and gives Jayme a gift but Setsuna suspects something off. The next day they both discuss Macherie's odd behavior and decide to go find her at the shrine. They find out she's been sent out alone to the same place where she was attacked before and decide to go make sure she's ok, together. The ruin is swarming with monsters and Setsuna jumps into the fight.

Setsuna admire's Jayme's dedication to protecting his sister. Thinking back on her own failures, she decides to fight for the siblings.

Episode 4: Those Who Have Stopped and Those Who Hinder Them[edit | edit source]

Setsuna strikes down a monster, noting they don't seem to live in the ruin but rather followed something into it. They quickly notice Macherie walking deeper into the ruin and run to her. Macherie says the Shrine Monarch saw a vision of something she will need for a ritual so Setsuna and Jayme decide to stay and help her look. The item is a special jewel that brings misfortune on those near it so it's kept safely away from the village in the ruins. Unfortunately they are attacked before they can find it by a strange monster.

They have to escape from the beast, Setsuna's blade unable to hurt it. Macherie suggests it may be the Keeper of the Shrine, left there to protect it and serve as a trail for shrine maidens. Macherie's dedication triggers memories in Setsuna but they only serve to further keep her emotions, and the siblings, at a distance.

Episode 5: Even so, Now is Not the Time[edit | edit source]

Setsuna is lost in thought, unable to decide how to proceed knowing full well Macherie will not leave without the jewel. Macherie consoles her, letting her know that she needn't be alone in her struggles and showing she understands why Setsuna keeps her an arm's length away. They all decide they'll need Macherie's special vision and Setsuna's combat prowess if they hope to defeat the Keeper before they go to face it once again.

Setsuna is still locked in battle with the Keeper, unable to keep up with its movements and keep it from attacking Macherie. It manages to hit her and triggers Setsuna's pent up emotional struggles causing her to lash out and "almost make the same horrible mistake." She regroups with Macherie who has found the weakness of the Keeper and rushes back into the fight, this time accepting Macherie's help, moving beyond her past reservations. She finally strikes down the Keeper with "Vagabond - Flawless Beauty" and the three gather the jewel before returning to the village.

Back in the village

Macherie was scolded by the Shrine Monarch for receiving help but also praised for knowing when to rely on others, either way the ritual will continue and they will use the jewel to make a staff for the soon-to-be shrine maiden. For now, the trio will return home, Setsuna finally deciding to settle down with her new family. 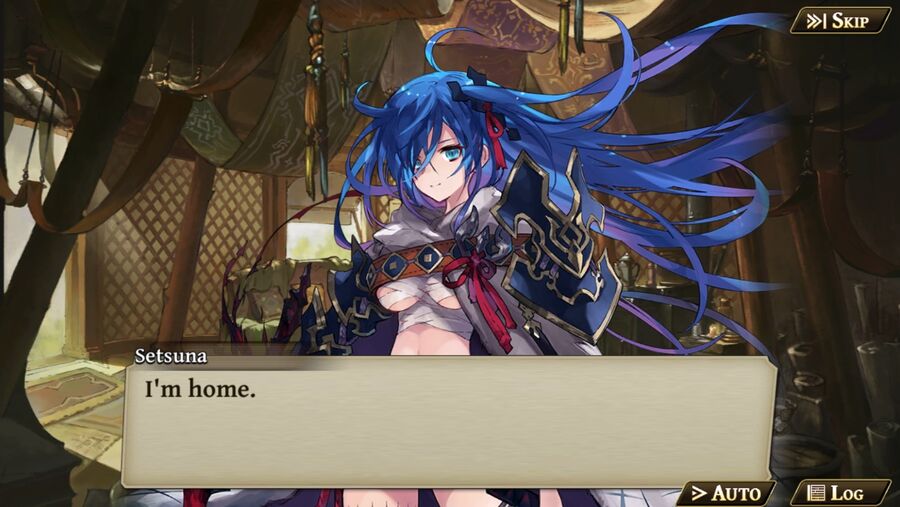