Most abilities available to a unit can be trained up to 20 points (some are automatically maxed and don't need to be trained). The cost of training an ability increases with each level. You have 99 skill up points available to use, and they regenerate at 1 every 30 seconds when used. Typically this cooldown should not be a problem unless you are leveling multiple abilities for multiple units in a short period of time.

For main and basic job abilities, additional skills are unlocked as you level the ability to certain levels. To determine what level you need to unlock specific skills you can hold down on the ability in question in the abilities list. This will bring up an interface where you can see what skills are available and what level is required to unlock the skill.

Example of the skill level information in the ability display.

Many skills granted by abilities have benefits which scale based on the level of the ability. To determine if a specific skill scales with the ability level, you can look up the skill on the unit job page in Alchemist Code Database. If the Skill Effect section lists a different value for Min and Max, that means the ability scales (the min would be the scaling at ability level 1, and the max at ability level 20). 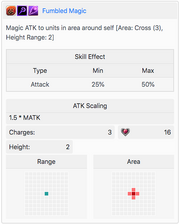 Example of the skill scaling information on the unit job page on Alchemist Code Database.

Which Abilities Not To Level[edit | edit source]

As a general rule you will want to level any ability that you plan to use on a unit and leave any abilities you don't plan to use at all untrained. That being said there are exceptions to this rule.

Ability Does Not Scale With Level[edit | edit source]

If the ability is a passive or reactive, there are some cases where the ability does not gain anything from leveling above 1 and is not automatically maxed. It is not harmful to max these, but it does not do anything useful and costs you zeni you might prefer to save. To check if the ability scales with level, you can look up the ability on the unit job page in Alchemist Code Database. If the Skill Effect section does not list a different value for Min and Max, that means the ability does not scale and does not need to be leveled. Some examples of passive/reactive abilities that don't scale with level are:

Since units are frequently used on auto for quests, raids and arena, it can sometimes be a good idea to limit what abilities you train on a unit to better control the unit auto behavior. Keep in mind that you can't untrain an ability level once you have trained it, so it is best to look at what you get from the ability before you train it. For more information about the AI behavior of units (primarily in the context of arena but also useful information in general) see Arena Guide by Gagging. Each job page on this site also lists the AI priorities for the job.

By limiting how far you train main or sub abilities, you can prevent the use of specific skills that may not be desirable on auto. Avoiding these skills will mean you do not have access to them on manual however, so you will have to make a judgement call on if you really want access to that skill when using manual. In some cases you might just pick one unit with the job to give the skill to, and leave it untrained on your others. Note that you should look at the scaling of the other skills the unit has access to on the ability before avoiding maxing the ability since it may reduce the effectiveness of those skills if they scale with level.

Some examples of specific skills you might wish to avoid:

In some cases the main job used by the unit is too important to go untrained, but there are some cases where you may want to force the unit to only use their sub abilities on auto (this is most common for raiding but can be used in other situations). Keeping at least one job main skills untrained to allow for this can be useful.

In some cases you may be bringing a unit only for one or a few specific skills. In those cases you may want to avoid training more than what is absolutely necessary to prevent the unit from wasting jewels or time casting undesired skills.