The Signaling Shot Echoes to the Other Side

Sound can echo thoughts in which words cannot.
The memories of those lost in the war, the harrowing times during enemy raids,
and when all raised their voices for the victorious return of the troops...

Attracted by the sounds of cannonfire is Bertha, a gunner of Envylia's knight faction.
Though she has some painful memories from battle that cannot be made into sound... 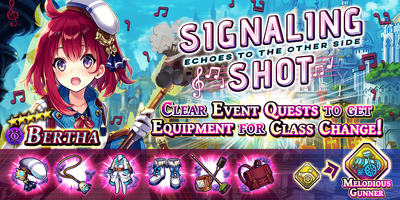 Complete the Quest Mission to obtain the job tokens needed for her class change.

Clear the Event to also obtain the Job Equipment for her Melodious Gunner job!