[Available after update on August 6]

For a limited time, Adaleigh will be available as a Mercenary at no cost. Take the chance to try out the unit in your battles! 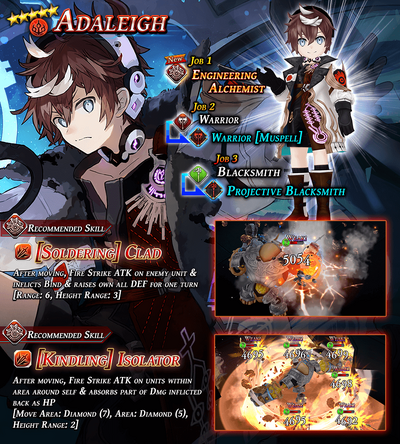 Adaleigh is a talented engineer who has invented such marvels as the Engineer Soldiers in the Acedia Belt Region. He has great confidence in himself; not because he sees himself as a genius, but because he works hard and is passionate about what he does. Although a prodigal genius who became an engineer at a very young age, he's still a charming young man who worries about his small stature.

Enchanted Job will also be unlocked for the following unit!

Use Adaleigh or a mercenary Adaleigh to clear a quest and claim the milestone to obtain Gems and Adaleigh Soul Shards!

Clear the quest once per day to obtain Unit Soul Shards for Adaleigh.

Notes:
You can play this quest up to a maximum of 7 times.