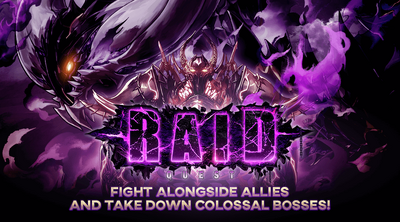 Introducing a new feature - Raid Quest which will be available after the update on June 13! 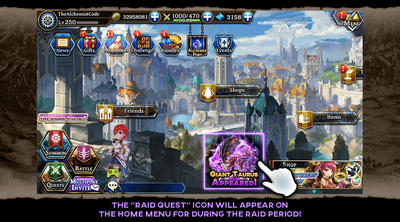 Defeat the Raid Bosses that appear in special areas! 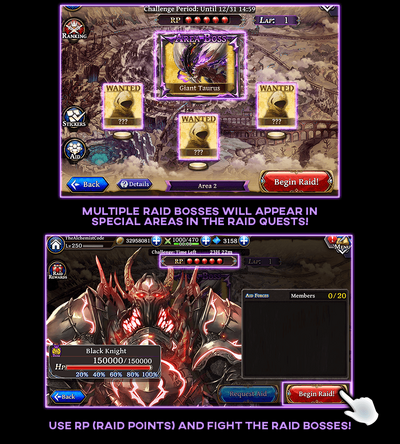 RP (Raid Points)
・Use RP to take part in Raid Quests.
・RP replenishes after an hour.
・If all RP is used, it can be replenished with 100 Gems.
・Quitting the quest will also result in RP usage.

Time Limit
If a Raid Boss is not defeated within 24 hours after the start of battle, it will be considered a failure and the battle will reset.

・Raid Quest rewards can be collected in a 24 hour period after a Raid and beware that the rewards will disappear if not collected within that time. 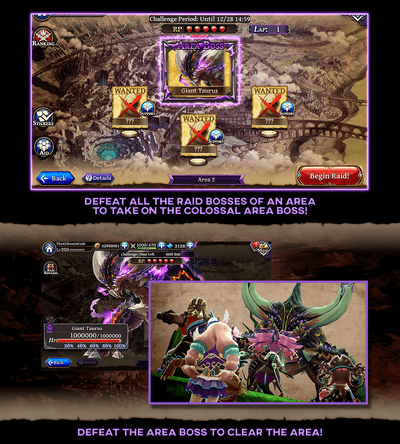 Time Limit
If an Area Boss is not defeated within 48 hours after the start of battle, it will be considered a failure and the battle will reset.

After defeating the Area Boss in the final area, the areas will reset and the Raid Quest can be replayed!

In the second time around, the Raid Bosses and Area Boss will be stronger!

Have your allies aid you in defeating the extremely strong enemies!

・Rewards received in the repeated Raid Quest may differ from the first time. 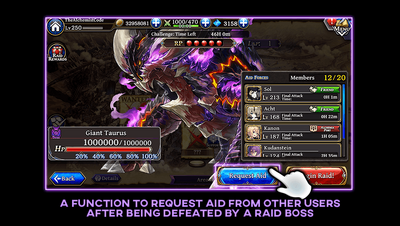 Request Aid
By requesting aid from allies, other users can join and help you on the Raid Quests.
・To request aid, one must start a Raid Quest.
・The max number of users that can join to aid is 20 per Raid Quest.

Aid
Other users may aid in Raid Quests already in progress!

・Aiding allies will cost RP, though note the first time one aids an ally in a Raid Quest it will cost 0 RP.
・If one quits aiding during a Raid Quest, they cannot rejoin the Raid Quest in fighting the same Raid Boss or Area Boss.
・After joining to aid in a Raid Quest, note that the previously received aid requests will not appear anymore.
・Players that have not reached Level 86 cannot partake in aiding allies.
・Users cannot aid multiple users' Raid Quests simultaneously. 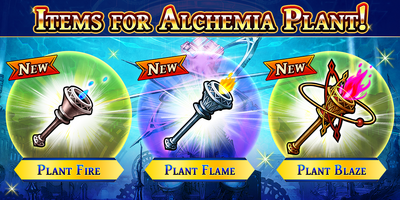 You can also obtain these special items as a Raid Quest Reward.

Note: You will not be able to leave the Alchemia Port during Raid Event Period.