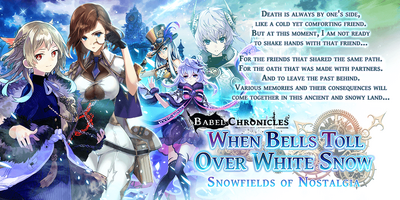 [Available after update on September 5]

Hard Stage is a time-limited event and will be available from September 5 – September 18.


What is Babel Chronicles ?

Babel Chronicles focus on the past of characters who appear in “THE ALCHEMIST CODE”.

・For stages other than EX Stage, you cannot use your own unit(s).
・You have to clear Ep 7 of normal mode to unlock the Hard Stage and EX Stage.


When Bells Toll Over White Snow [Snowfields of Nostalgia] [EX]

Clear the EX stage to obtain items such as Sinful Indulgence and Slothstein Token! 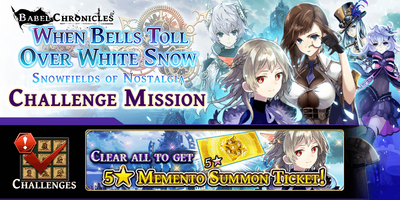 Notes:
・Challenge rewards will be sent to Gifts.
・Missions can only be cleared once. If you have already cleared the missions before, it won’t be available again.