[Available after update on September 17]

For a limited time, Ikasa will be available as a Mercenary at no cost. Take the chance to try out the unit in your battles!


Ikasa is a knight with an immortal body belonging to the Holy Guard. She is adept at handling Wadatsumi's martial arts and with alchemy. With a body that is neither alive or dead, she is able to perform miraculous deeds. She is nicknamed "Immortal" by her allies, and is feared because of her powers. 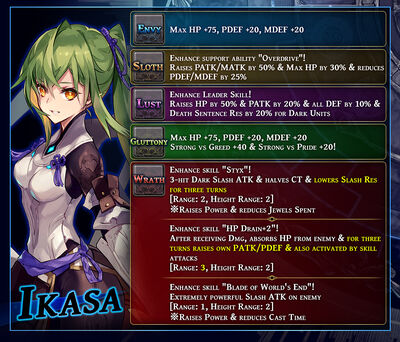 Enchanted Job will also be unlocked for Ikasa!

Use Ikasa or a mercenary Ikasa to clear a quest and claim the milestone to obtain Gems and Ikasa Soul Shards!


Notes
・Completed but unclaimed milestones will disappear 2 weeks after the end of the trial mission period.

Clear the quest once per day to obtain Unit Soul Shards for Ikasa.

Notes
・You can play this quest up to a maximum of 7 times.
・Player must have unit in party setup to enter quest.