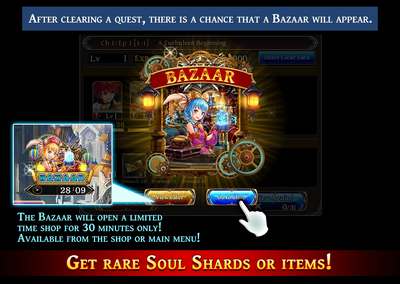 We're excited to introduce the new Bazaar, coming with the latest update from August 20!

After clearing a quest, there is a chance that the Bazaar will appear.

The Bazaar will open a limited time shop for 30 minutes each time.

The lineup of goods will be random each time.

From Soul Shards to Gear Shards, there will be many items to be found!

If you're lucky, the Bazaar might have some rare items as well!
※Items sold at the Bazaar will change depending on the player's level.
※The Bazaar will not appear with quests that do not use AP, such as Raid Quests and Training Hall Quests.

Notes:
・The Bazaar will not reappear after a certain period of time.
・Certain Unit Soul Shards only appear if you own the respective units.