Check out the details for our new units—Eren and Reiner who will be available with Enlightenment and Enchanted Jobs!

For a limited time, Eren will be available as a mercenary at no cost! Take the chance to try out the new unit!

You can obtain Reiner from the ATTACK ON TITAN collaboration Event. Check out the event news for more details! 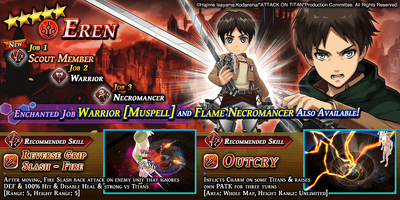 Eren is a young member of the Scout Regiment that hails from a world dominated by Titans. He is impulsive, easily snaps in anger, and tends to run head-first into dangerous situations. With the power to transform into a Titan himself, he fights to exterminate the creatures threatening humanity. 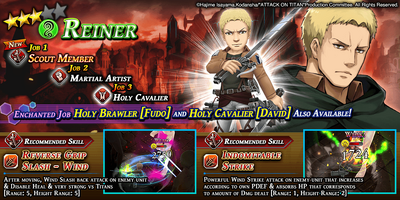 Reiner is a soldier who hails from a world that is dominated by Titans. He is a robust man with a strong force of will who has earned great respect from those around him, and plays a central role in Eren's group. He has the ability to transform into a Titan with a body clad in sturdy armor, giving him immense and nearly unstoppable power.