[Available after update on July 18]

Introducing the new unit – Orion who will be available with Enlightenment and Enchanted Job!

For a limited time, Orion will be available as Mercenary at no cost. Take the chance to try out the unit in your battles! 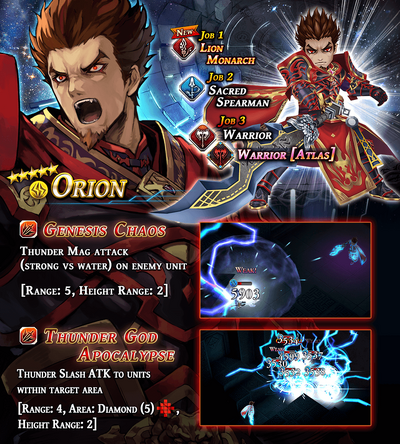 Orion is the emperor of Greed Dike. Known as the Lion Monarch for his bravery and arrogance, he personally joins the fevered fray of battle, despite being a ruler, and there wields his unmatched martial prowess. A capable general in whom both burning aggression and calm assertiveness reside, he also holds great ambitions within his heart.

Revenge → Atlas Counter
Counter when Dmg is received & raises own PATK for one turn (stackable up to 5x) & also activated by skill attacks [Range: 1, Height Range: 2]

Get rewarded when you unlock the new enchanted jobs!

Check out the Campaign Milestone tab for the full list!

Get ALL of the following when you log in anytime during the campaign period!