[Available after update on September 5]

Introducing the new unit – Cheryl who will be available with Enlightenment and Enchanted Job!

For a limited time, Cheryl will be available as Mercenary at no cost. Take the chance to try out the unit in your battles! 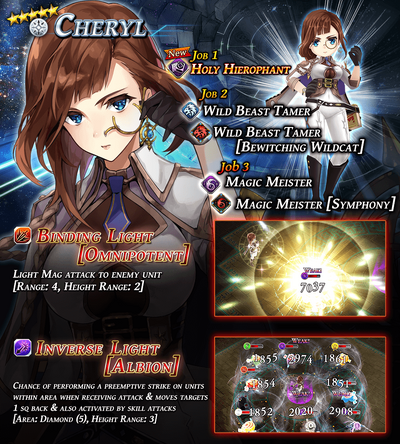 An inquisitor from Slothstein, highly skilled in the use of magic. Since her parents were charged with violating the taboo on Alchemy, Cheryl fears the consequences of disobeying the law, and forces herself to live by a strict code of rigid adherence to rules and regulations. She grew up logical and straight-laced, leaving her with no resistance to frank compliments, which will make her blush uncontrollably.

There are 2 Babel War Arts quests for Cheryl.

Raise Cheryl's Level to 85 and complete the Milestone Mission to receive the key! It can then be used to unlock “War Arts Mastery - Cheryl Edition”.

Clear it to unlock the following skill update!

Complete both to receive the key! It can then be used to unlock “War Arts Mastery - Cheryl Edition (Round 2)”.

Clear it to unlock the following skill updates!

Notes:
・In "Babel Chronicles Chapter 2", it will display a change for one skill but in fact two skills will change.
・If the requirements have already been met for obtaining the unit Cheryl from the Milestone Mission, the app needs to be reset in order to be achieved.


Try the new Job and get Gems and Soul Shards!

Notes:
・Units in the training area will state "Level 85" though they are at Unit Level 91 clearing up to the Gate of Lust.
・The quest will be cleared once the specified number of turns has passed.
・Playable multiple times during the limited period.