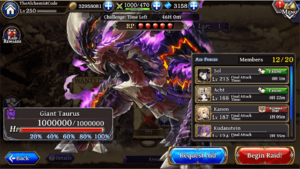 Example of the raid interface

Raids are a feature which allow players to combat strong enemies over time. You can get both personal rewards for killing raid bosses and also help your guild rank higher to acquire better rewards. Friends can assist you in raid kills as well. During an active raid you can't leave your Alchemia Port. 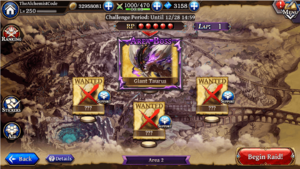 Example of the raid set interface

Raid quest rewards can only be collected within a 24 hour period after the raid and will disappear if not collected by then.

Every member of your Alchemia Port will get rewards based on the kill points of the guild after the raid period is complete.

You can receive items for leveling your alchemia port from raiding:

You can aid allies in their attempts to kill raid bosses. If someone makes an attempt on a boss, they can call for help once. Alchemia Port members and friends will show up at the top of a person's potential assist list and you can assist one person at a time. It is possible to exit an assist to help someone else but then you will get no credit for the boss kill and can't rejoin on that same boss. A maximum of 20 players can assist on a boss.

The first assist on someone's else's boss is free, but additional assists on the same boss will cost you raid points. Assisting players outside your Alchemia Port will not help your guild ranking, but it will allow you to get stickers for those boss kills and complete your set. You also get a small amount of Zeni and other minor rewards for assisting other players.