From The Alchemist Code Wiki
(Redirected from Units)
Jump to: navigation, search
For a list of units, see list of units.

Units are the characters you can collect and utilize when playing the game.

Units can be obtained via a variety of sources:

Each unit has a rarity, represent by the gold stars under its icon, or next to its name when viewing the unit's details. Gold stars are the unit's current rarity, while empty grey stars represent the unit's ability to increase its rarity via evolving. Rarity has an effect on things like the units stats, max level, max job level, and maximum limit break. Different units have different starting rarity as well as different maximum rarity.

Evolving is a process by which a unit's rarity can be increased. In order to evolve a unit must have an empty rarity star and must be max level for their current rarity (excluding levels added by limit breaks). Evolving also requires Zeni and special materials depending on the unit and its current rarity. See the individual unit's page for the materials required for each stage of its evolution, or you can click on the evolve button for the unit to see what is required.

Each unit starts with a single job and can unlock one or more additional jobs by Limit Breaking a certain number of times. Switching a unit's active job changes the its stats and available abilities. Certain job abilities stay available to the unit once learned regardless of job, however, making it beneficial to level up all of the units jobs in order to increase the units usefulness and help distinguish it from other units with the same job. Jobs have levels which determine which abilities the job can learn and which gear the job can equip. A job's level is increased by equipping all 6 pieces of equipment, however the unit's rarity limits the maximum job level. Upon reaching job level 11 and equipping the last set of equipment a job will become mastered.

When you raise your units to job level 11, then fill all the equipment slots at that level, the job is considered mastered. When you master a job you get a % bonus to a few specific stats (the stats that it benefits vary by job). Typically there is also a significant % boost to HP (hit points). The job mastery bonus not only applies to the currently active job, but to all jobs on the unit, regardless of which one is currently active. So to fully maximize a unit you may want to master all of their jobs.

Because the amount of equipment required to fully master a job is significant, you may want to consider how heavily you are using the unit before investing in the secondary job masteries. The HP gain is usually enough reason to do it for any actively used unit in the long term, but in the short term the primary job is a higher priority.

If you wish to know the mastery bonus you receive for a specific job you should look the unit up in Alchemist Code Database: Units. The job mastery bonus is listed under the job information section, under Job Master Bonus.

When you have unlocked more than one job on a unit, you can use the job setup menu to configure the the job to use a mixture of abilities from that job and the other unlocked jobs. The main ability associated with a job is always locked to the active job, but you can utilize the basic ability from another unlocked job. You also get slots to select one counter ability and 2 passive abilities from any of those provided by the unlocked jobs on the unit. For most jobs raising them to job level 6 is sufficient to unlock all abilities, but there are some that require a higher job level for some abilities.

You can level each skill on a unit up to 20- the cost increases the higher the skill level. In most cases you will want to max the skill at 20 for any skill you are using on the unit. However there are some cases where it may be advantageous to leave a skill unleveled or unmaxed. Once trained a skill can't be untrained (although if you do a job upgrade you will need to re-level your skills for that job). For more specific details about how to judge which abilities to level, see Ability Leveling.

Limit break increases the maximum level of a unit and unlocks the unit's additional jobs. In order to limit break a unit the player must have a certain number of Soul Shards specific to that unit. Different units can limit break a different number of times. How many times a Unit is able to limit break is indicated by the star shaped icons on the unit's limit break button, with each star representing 5 limit breaks and the points of the star being individual limit breaks. For more information on how to acquire shards for limit breaks, see the Character Shards page.

1Not all units have 3rd jobs, even if they are able to limit break to these levels.

Note that some units also have a job+ or enchanted job upgrade available. Typically the job upgrade requires that you have 15 limit breaks and have reached job 11 on the job that the job upgrade replaces (i.e. sniper for Caris, bard for Polin). For more details, and to see a list of available upgrades, see Job Upgrades.

A leader skill increases the stats of the entire team, typically based on certain restrictions (for Dark Units, for units from Envylia, etc...) though some are more generalized. A full listing of leader skills can be found on the Unit Leader Skills page.

This unit upgrade feature allows for increasing the level cap on a unit from 85 to 95 and can upgrade the stats, a passive the unit possesses, their leader bonus, strength vs. certain sins(Greed, Envy, Lust, Gluttony, Wrath, Sloth and Pride), and abilities for their jobs. Individual units will get access to this gradually. For more details, see Enlightenment.

Many units have alternative skins available through a variety of means. Some are permanently available, some temporary. Some are acquired via milestones or mission rewards, and some only through summons, gems or bundles. Some memento also provide skins. For more details on available skins, see the Alchemist Code Unit Skin Guide (GoogleDoc). 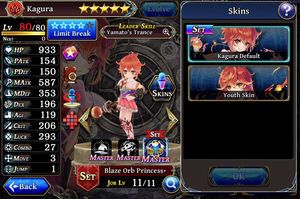 You can select a skin on the unit page if you have one available.